Insurance if often a deciding factor in whether or not patients will seek out specific treatments. The high cost of healthcare has resulted in a reliance on insurance to make costly procedures, medications, and therapeutics more accessible to the public. As a healthcare company looking to break into the US market, you must understand the insurance program giants present in the US to truly put yourself in the mindset of your targets and end users.

In the US, there are two types of public insurance programs created with the intent to cater to the various needs of the citizens: Medicare and Medicaid. President Johnson established these programs in 1965 as an addition to the Social Security Act of 1935. Though there can be overlap, Medicare and Medicaid policies play off of each other to support Americans who may not be covered under private insurance.

Medicare typically covers US citizens and permanent residents over the age of 65, but there are some circumstances in which people under the age of 65 can also be covered. More specifically, people suffering from Lou Gehrig’s Disease or end-stage renal disease, or people who have received disability benefits for more than two years would also be eligible for Medicare.  Even as the largest public insurance entity in the US with 61M people in 2019, it still has many components that make it more restrictive and “private” than one might expect.

Medicare is broken up into Parts A-D, which each cover a different area of healthcare and have more specific eligibility requirements and financing methods.  Let’s take a look at each of these parts in greater detail, as every person in Medicare does not qualify for all of these benefits. 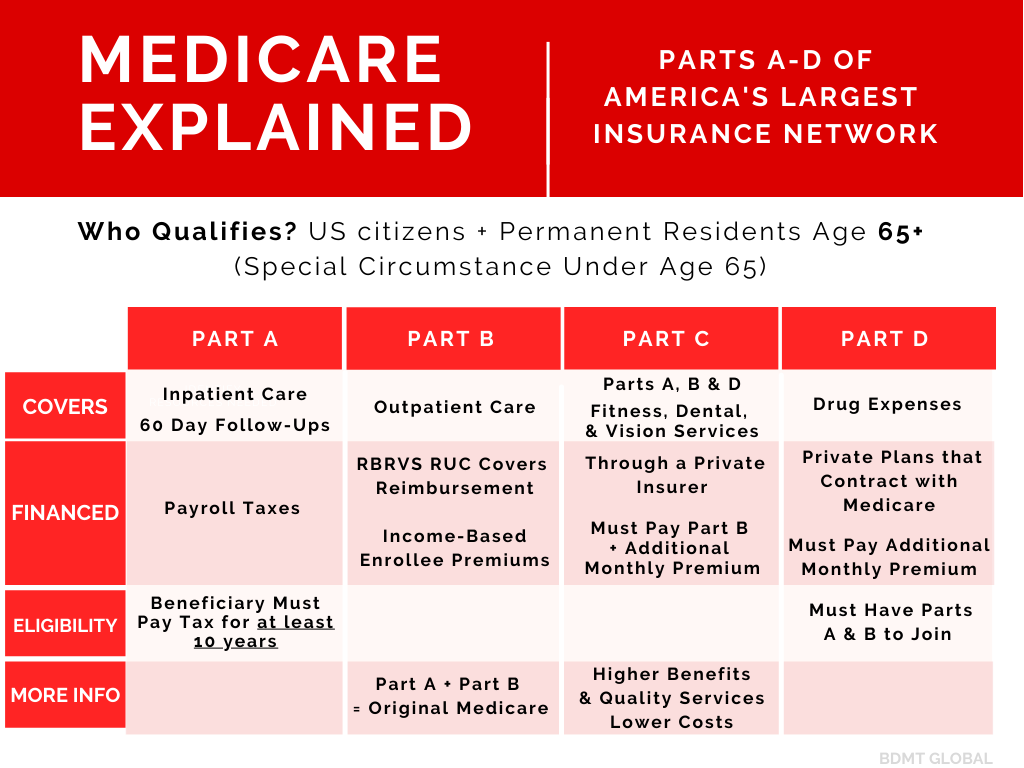 The ABCDs of Medicare

Part A covers any inpatient hospital care. Follow-ups 60 days after discharge, hospice, nursing facilities, and home health care are included in this plan. As it is financed through payroll taxes (1.45% from both employers and employees), this plan is considered the hard-earned reward of loyal taxpayers.  In order to be eligible, the beneficiary must pay this tax for at least ten years.

In contrast, Part B covers outpatient care, including physician visits, ER/ambulance visits, dialysis, transfusions, and medical supplies/equipment.  The Resource-Based Relative Value Scale (RBRVS) Update Committee (RUC) controls the reimbursement costs by setting policy standards and procedures.  Because Medicare is such a large entity, many private insurers follow their lead, so the RUC sets the tone for the whole health insurance landscape.  Additionally, Part B is financed through income-based premiums from the enrollee. Consumers can combine Part A and Part B into what is often called “Original Medicare.”

Part C, or Medicare Advantage, is a plan through a private insurer that helps cover all Part A and B costs, as well as the addition of Part D, which we’ll touch on soon.  It also covers some extra services not covered under the typical Medicare plan, such as fitness, dental, and vision services.  In order to be enrolled in Part C, consumers must pay the Part B premium on top of an additional monthly premium.  As a “private” plan, enrollees receive more benefits, better quality services, as well as lower costs than Original Medicare. However, because these plans are made up of networks of providers, there are limitations of preferred providers from whom consumers can receive care.

Lastly, Part D covers prescription drug expenses covered by private plans that contract with Medicare.  Each enrollee must have Part A and B to join, and has to pay an additional monthly premium.

Additionally, some people choose to purchase supplemental coverage called Medigap, which is also given through private insurers.  It helps cover costs that Original Medicare does not cover, such as out of pocket or international costs.

As we can see, although Medicare is referred to as a public insurance plan, there are many added premiums and expenses enrollees must pay in order to qualify for more extensive benefits, which are covered by private plans contracting with the larger program.